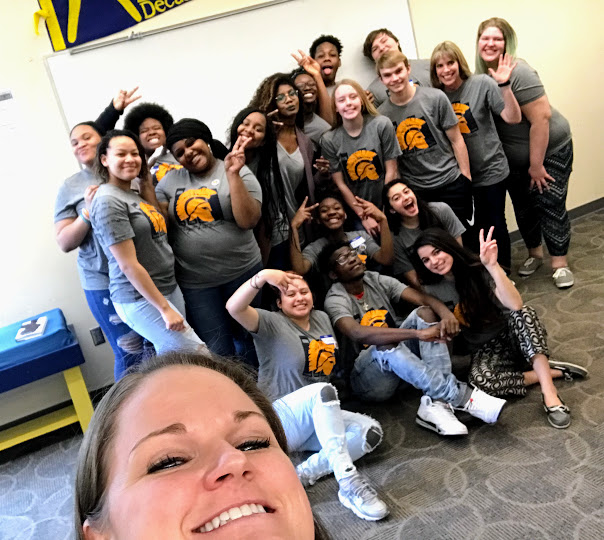 When you find out at 8PM the night before an author is visiting your school that there's going to be a two-hour delayed start because of icy roads, you might panic just a bit.  When the superintendent says they'll re-evaluate at 5AM to see if they need to close school all day, you might have to practice your deep breathing to keep the voice that's hysterically shouting, "NO! NO! NO!!" at bay.

This past summer I became a site leader for Project LIT Battle, our branch of Project LIT Community, a grassroots book club started in Nashville, Tennessee by Jared Amato, an English teacher who’s on a mission to spread book love and eliminate book deserts in his community.  Our book club started small with my AVID 10 class reading Angie Thomas' The Hate U Give  in September and Kwame Alexander's Solo in December.  We discussed books, played trivia and ate brownies.  The kids, who had never been part of a book club outside of class before, joined by a few teachers, had a great time.  They felt strong discussing these books and competed fiercely during trivia.

After reading Dear Martin by Nic Stone in October and meeting Nic at NCTE in November, I knew this book was going to have a huge impact on my students.  What I didn't know was that through a series of amazing connections, we'd have Nic Stone at our school on February 22nd for a book club!

So you see, a snow day was really not in the plans.

Luckily, school was not cancelled.  I arrived the next morning, over roads that were wet, but not slippery, my minivan packed with one sixth, one seventh, one eighth, one ninth, and two tenth graders.  As I walked down the stairs, I could see a whole group of my students, dressed in their gray Project LIT Battle t-shirts, already at school waiting in the media center for  me.  My heart finally started beating normally again.  It was going to be okay.

While I am tempted to write every detail of our magical day and show you the many, many photos I took, my students' voices are in my head telling me to quit doin' too much. So, the shorter version it is! 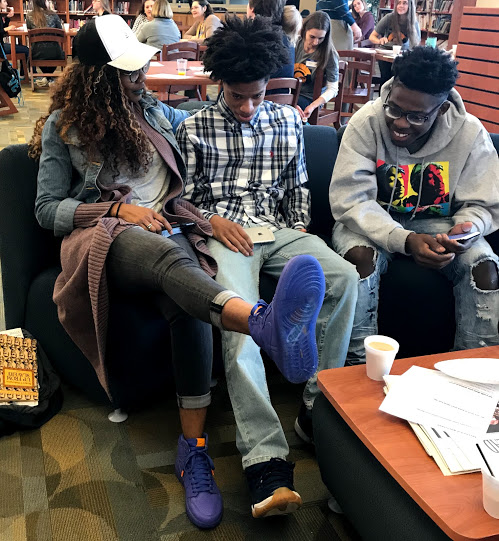 Let me start with Nic Stone.  If you ever, I mean ever, get a chance to meet Nic and have her spend time with your students, do it.  Dressed in her white magical unicorn baseball cap, teal lipstick, and Grape Jordans (a request from my student Izaiah), Nic gets kids.  From the way she listened intently to my students' questions and answered them in honest, straightforward ways to silly candid photos and a round-off back-handspring in response to my cheerleader student's back flip, Nic had them enthralled.  Every student in my class felt special, heard, and valued.  I suspect there was even a bit of jealousy at having to share her with other students. 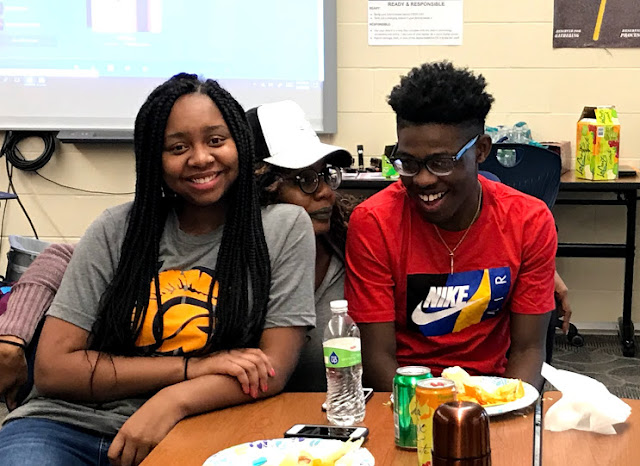 Nic is a lovely combination of serious and fun - the perfect way to capture the attention of teens. During book club, the audience intently listened as she spoke about racial profiling and the real events that led to her write Dear Martin.  We heard how hard the book was to write, and how passionate Nic is, not only about making sure Dr. Martin Luther King's legacy stays true to who he really was and how he was perceived during the Civil Rights Movement, but also to make sure her readers face the real, often uncomfortable, issues of racism in our society today.  Along side the seriousness, my students also got to see Nic Stone the fun, playful person, adding bunny ears to pictures, signing kids' t-shirts with personal messages, and telling secrets about Angie Thomas (Uh-huh. Wouldn't you like to know that one?).  Kids truly got the message that you can be educated, smart, passionate and fun all at the same time.

Listening to Nic talk about the structure of Dear Martin, it was so obvious that Nic not only gets teens, but teen readers too. She intentionally built Dear Martin to draw in kids who don't typically see themselves as readers. She said she writes for the kids who are very particular about which books they're willing to read; the ones you better hook early and keep interested or they'll have no problem abandoning your book. These readers need books that mix it up.  So Dear Martin mixes many formats.  It's structured as a narrative interspersed with journal entries.  There are also news articles and pages where the intentional use of white space is stunning. 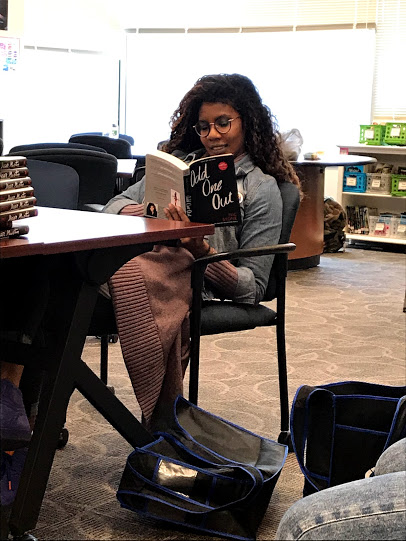 Our day ended with a small group of kids and me gathered around Nic in our classroom. She opened a copy of her new book, Odd One Out, and began to read Chapter One aloud.  The kids leaned in and just like that, we met new characters we want to know and love as much as we did Justyce and S.J.  Carried by her voice, we leapt into the world of another Nic Stone book. And then, too soon, trailing magical unicorn dust, Nic was gone.

I decided early on that if we joined Project LIT, students would take center stage.  Being part of this book club was for and about them, so my students did everything--I just structured, guided, and stayed behind the scenes. Students visited community groups to promote Dear Martin and our book club; they read, discussed, cried, argued, and physically responded to Dear Martin in class; wrote discussion and trivia questions, created and revised introductions and closing comments; practiced speaking in front of groups; and then the day of the book club, they led the whole thing.  It was truly a student-powered day.  Their thoughts. Their voices. Their day.

While it was a group effort, a few students deserve special mention. First is Kiessence who painted this beautiful watercolor for Nic.  She wanted to capture the theme of racial profiling found in Dear Martin, and I'd have to say she nailed it, don't you think? 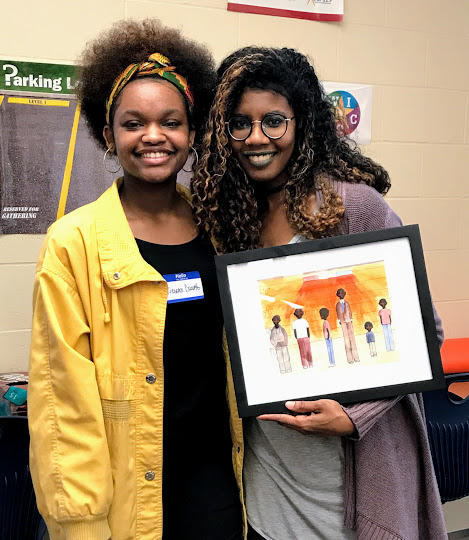 Next comes the dynamic duo of Izaiah and Atiyah, who interviewed Nic in our second assembly. Atiyah, the queen of sticky-noting books and intense opinions about what she reads, led the process of creating interview questions for the assemblies. She and Izaiah did an amazing job asking the questions they had prepared, but also responding in the moment to the interview with follow-ups and even some added questions they thought of on the spot, including getting Nic to share a letter she received from a "non-racist" reader critiquing Dear Martin. 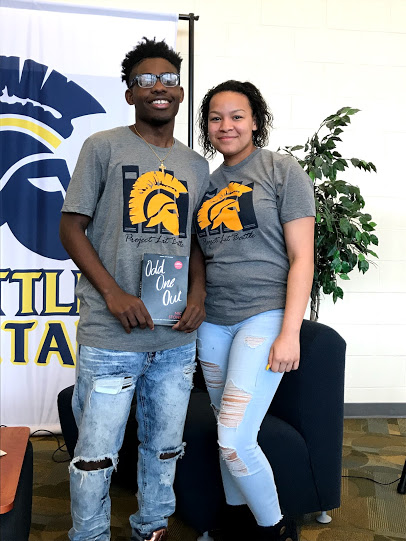 Finally, Danny.  One late November morning, the classroom was dead silent with everyone totally absorbed in their books.  All of a sudden, Danny, who was reading Dear Martin yelled out, "What the freak, Bro?" Startled, I turned to see what happened and was met by a genuinely shocked, hurt expression on his face.  Yep, he was at that part. One tweet later, and Nic had changed her Twitter name to Nic "What the freak, Bro?" Stone. 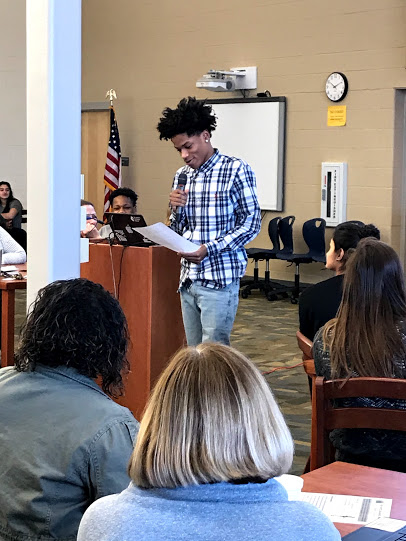 Danny was the one who got me to ask Nic if she'd Skype with us (something I would not have been brave enough to do if it was my idea), and then when I surprised him with the real Nic Stone on our classroom screen two days later, he was so stunned, he didn't say a word.  At the book club, however, after finally meeting Nic in person, Danny confidently introduced her talk, and then at our first assembly, he sat, microphone in hand, and interviewed Nic Stone.  He got to see the power of an authentic emotional reaction to a book and the power of asking for what you want.  Most of all he got to see that words matter, that you can use them to impact your own world, that of your classmates, your teachers, and even your community. 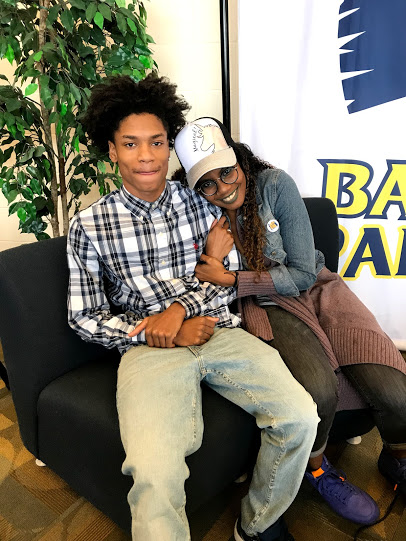 Popular posts from this blog

In a World of Colonization, #MeToo and Racial Profiling, What Does Helping Really Mean As a Teacher? 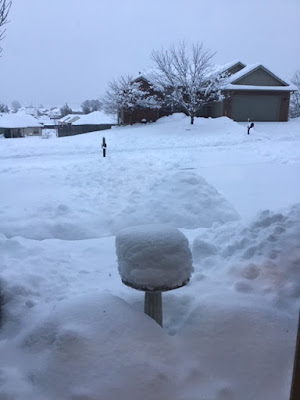 [Guess what?  I actually wrote this post a whole year ago.  Then life got messy and I started questioning everything about myself as a teacher, and well, like a kid who thinks the paper they just wrote might be terrible, I just abandoned it.  But tonight, on New Year's Day evening, I opened it up and have decided it's time to share.  I did split it into two posts because it was really long, so the next one will come soon.  Maybe if I can send these out into the Universe, I'll be ready to write again.  Fingers crossed.]

As I let the dog outside this morning I noticed that it is still snowing.  It started on Friday about noon and it's now Sunday morning.  I don't know the official total but I do know that my fifty-pound dog is now wading in the snow.  He's too tired to leap around like he did yesterday.  I'm guessing we're close to 20".

Genuinely Helping the Humans in Our Classrooms to Grow: Part 2 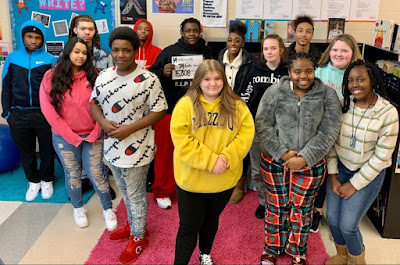 I'm getting ready to return to school on Monday. I have a lot to write about last semester, but first I'm going to venture further into the question:  how do we help the kids who feel unreachable, the ones who seem driven to cause chaos, pain, and suffering to everyone around them?  For me, this has been a week of learning about the toughest kids we have and it started in an unlikely place:  with witch doctors.

I'm often reading four books at any given time:  one adult novel beside my bed, one adult novel on my iPad for reading on the treadmill (in the snowy winter); one book to listen to in the car; and one YA novel as a classroom modeling book.  My in-the-car book is usually nonfiction, sometimes biography (I listened to Michelle Obama's Becoming recently); sometimes self-help and motivation (like Good to Great by Jim Collins); sometimes something historical like The Boys in the Boatby Daniel James Brown.  And sometimes, a book for no known reason crosses my path an…
Read more 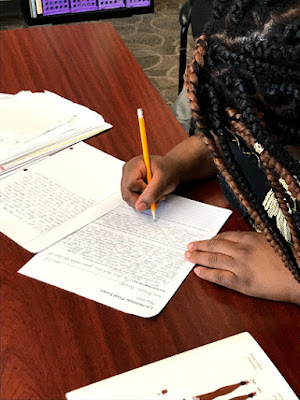 My class was set up as an intervention, a remediation, a fix-it for students who have fallen behind, fallen off, or fallen out of favor, I’ve learned. It’s convenient to think we’re fixing problems, catching them up, helping them succeed.

It’s a nice game we play when we set up interventions.

I do not, however, see my classroom the way others might. I do not see a workshop for the broken, a repair shop where I take apart, analyze, diagnose, mend and put back together; a place where I patch and plaster, covering cracks and flaws and shining them up until they’re ready to be sent back to the world, sewn up, fixed, healed and good as new.

Instead I see my classroom as a haven, a safe oasis, a place where being you is the best thing this world could ever have. I see my job as cracking open, leading out, uncovering the lost humans who were buried under the avalanche of other people’s massively broken expectations. I see my r…
Read more